What 2,392 Incarcerated People Think About #DefundThePolice

Americans are grappling with intensifying calls to remake the criminal justice system. We asked people behind bars to weigh in. 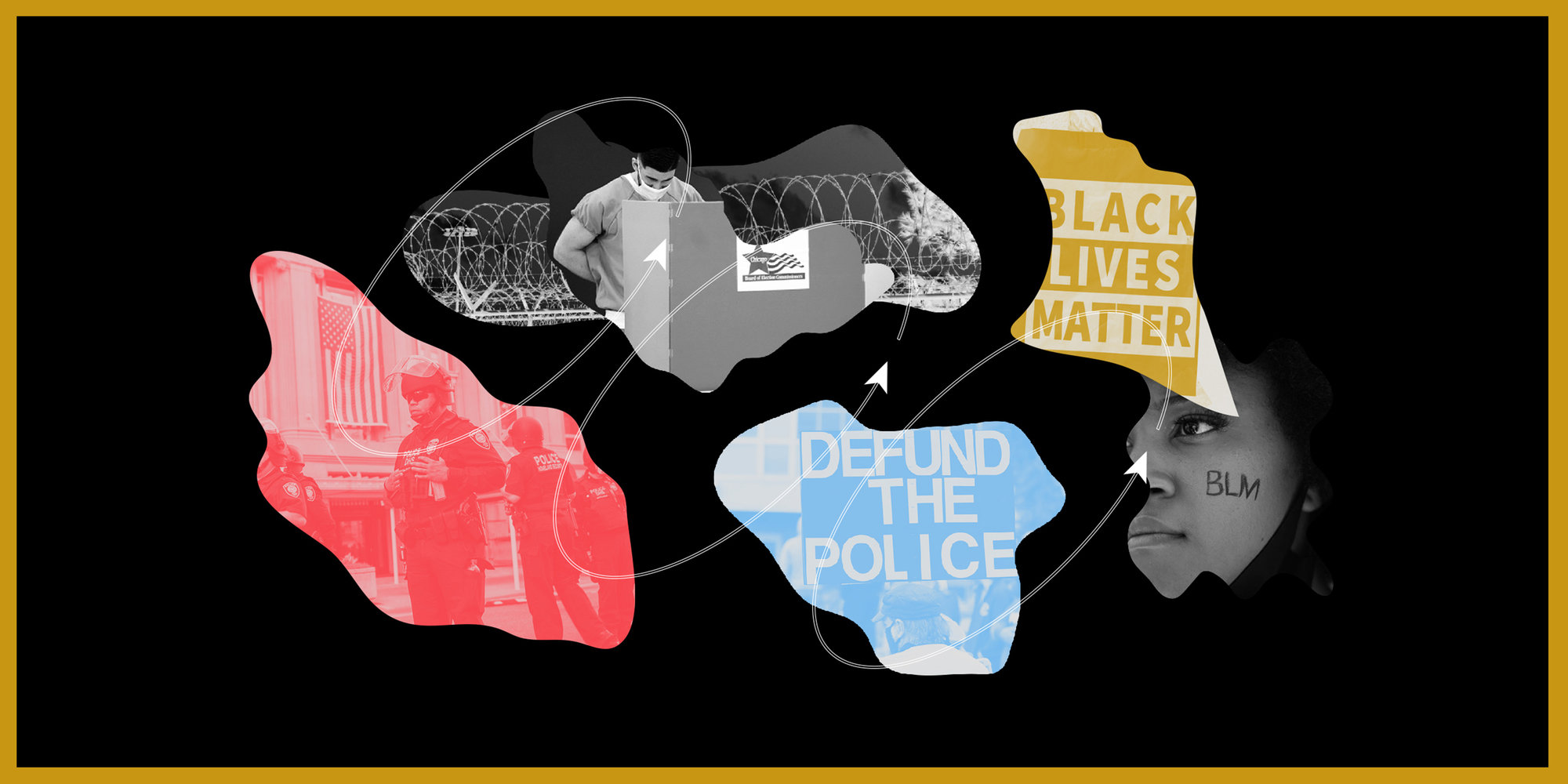 How do we fix policing in America? Can it be fixed? Donald Trump has made “law and order” a central message of his campaign, portraying anti–police brutality protesters as dangerous. Joe Biden has emphatically rejected protesters’ calls to defund the police and insists that less drastic reform can make a difference.

The Marshall Project partnered with Slate to conduct the first-of-its-kind political survey of people in prisons and jails around the country. Read more about what might have helped them, in their own words, and how to help people vote from jail—when most don’t realize they still can.

Whoever wins the election will help shape the future of criminal justice. But while the effects of the pandemic and police violence are magnified for people behind bars, the vast majority of them will not be able to press for solutions by voting. So The Marshall Project and Slate asked them directly what they thought.

In March, we launched a first-of-its-kind political survey of people behind bars, reasoning that while they are constantly talked about on the campaign trail, their own views are rarely sought. The survey showed that despite being temporarily barred from the political process, many people in prison remain politically engaged—and had some surprising political preferences.

In this second survey, incarcerated people showed they have passionate and nuanced opinions about what interventions might have kept them out of prison and what policies the next president could pursue. They’d like to see money shifted from policing and spent instead on mental health care, affordable housing, drug addiction, health care, livable wages, and preventing domestic violence. As in the first survey, views of people behind bars—both Black and White respondents—diverge from those outside, particularly in their support for defunding the police and Black Lives Matter.

With the help of Edovo, an education-focused tablet company that provides its services free to incarcerated people, we reached nearly 2,400 people in prison and jail. Respondents are incarcerated in 12 states. Roughly 20 percent are Black, 50 percent are White, and the remaining 30 percent are Native, Latino, Asian, or have mixed heritage. Most have completed high school. Seventy percent are men and 14 percent are women. The majority are serving time in prison, and 42 percent are in jail.

What Would Have Kept You Out of Prison?

A new generation of Black activists and organizers has succeeded in changing the conversation about criminal justice and policing. The central idea: Move money from police to services that could address deeper causes of crime, because many communities with high rates of violence have been historically overpoliced but under-resourced.

Across the country, some policymakers have taken up the message. They’ve removed police from public schools, slashed funding to police departments, and tasked social workers with responding to 911 calls about people in the midst of mental health crises.

But these changes may have come too late for the 2.3 million people already behind bars. Decades of punitive policies have created a massive and aging prison population. To be sure, criminal justice reforms have shortened sentences and created more opportunities to divert people away from prison. But many prisoners will serve out their time as the nation grapples with new ideas about fixing the criminal justice system.

We asked incarcerated people what might have prevented them from committing the crimes that landed them behind bars. Most respondents, regardless of race or political affiliation, cited the kinds of kitchen table issues usually reserved for discussions about the needs of everyday Americans.

“Better paying jobs in small communities,” wrote one respondent in jail in Illinois. “Working a low paying job, [where you] can't get by, can't put food on the table to feed your family sucks. So what do you do? You go back to the streets, where you can make a couple hundred in an hour.”

“Programs that help with concerns of what we go through as young Black men,” wrote another. “Lots of counseling mentally, physically and emotionally.”

“More help with housing, so I could have afforded to live in the city and use public transportation instead of living where I could afford to live and having to drive without a license to get to work,” wrote one respondent incarcerated in Maine.

Mental health counseling and affordable housing topped the list of interventions, with over a third expressing support for both. About a third cited a better education, going to college and a livable minimum wage job; about a quarter chose finishing high school and access to affordable health care.

Many women who responded to the survey highlighted their experiences with domestic violence, which, research shows, is a leading cause of homelessness among women.

“Women that get abused end up homeless trying to get on their feet when it’s hard finding support,” wrote one respondent who is incarcerated in Arkansas.

“Having a battered women's group and being able to have a safe house and [re]sources to help relocate could have made a difference,” wrote another.

“The problem is returning to the streets,” wrote one female respondent in jail in Washington. “A lot of people are not eligible for work release. We get $40 gate money [the money given out when they leave prison] and are lucky if we qualify for a house voucher. Housing is the problem. If we can go directly to the top of housing [lists] then we could receive stability.”

Some respondents emphasized their own responsibility for their mistakes.

“Although growing up Black came with stigmas, I still chose my path,” wrote a respondent who is incarcerated in Arkansas. “I had options. I chose the streets and the lifestyle that came with it. I never knew who I was until I came to prison and found [myself] and my calling.”

These attitudes cut across racial lines.

“Opportunities to not come to prison are everywhere, yet people still make poor choices. The real problem is that people are not required to fix themselves; they can simply blame a system,” wrote a White respondent who is also incarcerated in Arkansas. “The problem is not the system, but millions of people who are looking for someone to blame for making poor decisions. … I know because I was once like that.”

For many, the path out of prison includes several appearances before the parole board, where they must take responsibility for their actions, show remorse, and demonstrate true change.

Since the widespread protests this summer, Americans’ attitudes on policing and racism have starkly divided by race and political party. But incarcerated survey respondents across the ideological spectrum, of all races, showed significantly higher support than the general public for the Black Lives Matter movement and its demands.

Such enthusiasm seems to outpace that of the general public. In one Pew survey from September, for example, just 22 percent of White adults and 62 percent of Black adults strongly backed Black Lives Matter.

People behind bars also expressed more support than did those outside for defunding the police and diverting the money instead to such services as mental health or after-school programs.

Four out of five respondents supported such a transfer, including almost 90 percent of Black men and three-quarters of White men. Even among incarcerated Republicans, 64 percent backed this idea, while 36 percent opposed it. In contrast, a Gallup poll conducted in late June and early July, at the height of the protests, found that 41 percent of White people and just 5 percent of Republicans support transferring funds from police departments to social services.

Americans across the ideological spectrum have generally expressed support for large-scale prisoner releases to slow the spread of the virus. Half of our survey respondents were confident that people convicted of violent and nonviolent crimes would be equally likely to succeed if they were released during the pandemic.

The survey results suggest a need to reframe the debate substantially over public safety and crime. Despite their political differences, the respondents are unified in their belief that finding affordable housing, making a living wage, accessing mental health care, and having the insurance to pay for it would have made the most difference in their lives. Yet these kinds of issues have historically been missing from the criminal justice discourse.

Many of these challenges are magnified after people return home from prison or jail. Experts often say the first 72 hours after release are critical to determining whether a formerly incarcerated person’s path will lead away from prison or make a sharp U-turn.

“As a result of jail overcrowding, I was given a 27 day early release with no warning so the bed I had reserved at a treatment facility was not available,” wrote one respondent in jail in California. “I was doomed before I even hit the gates. Just a roof over the head could’ve saved me, the rest would work itself out if you have the safety of shelter.”

For people leaving prison, a felony conviction comes with multiple consequences beyond incarceration. A criminal record makes it harder for people to find work, get access to affordable housing, and receive a college education. Until recently, several states maintained a lifetime ban on food stamps for people with felony drug convictions. Applicants for federally subsidized housing programs must disclose their criminal histories, making it easier for private landlords to deny their applications. In some states a criminal record bars people from receiving professional licenses or joining the fire department.

At the state level, there are signs elected officials are beginning to embrace the connection between social and economic security and criminal justice. By the start of the year, 36 states had prohibited employers from inquiring about criminal histories during the application process, according to the Collateral Consequences Resource Center, a nonprofit working to raise awareness about the consequences of a criminal conviction. In Michigan, Gov. Gretchen Whitmer recently signed a series of bills that will automatically expunge the records of people convicted of certain crimes in addition to expanding the list of convictions eligible to be erased. And several states have expanded voting rights for people returning home from prison.

But for some respondents, these changes arrived too late.

“I was sent straight to prison at 19 and missed out on some of the best years of my life,” wrote one respondent in jail in California. “This is not rehabilitation. Had I been sent to some sort of program, been given some sort of vocational training, I could have had a chance at a normal life instead of being sent to prison where I was surrounded by killers and career criminals. It pretty much ruined my life. I never got a second chance, program or anything.”

Special thanks to John Timpone at Edovo and Lawrence Bartley, director of News Inside at The Marshall Project.