Prisons Are Releasing People Without COVID-19 Tests Or Quarantines

People getting out of prison are bringing the virus outside because lockups aren’t taking basic precautions. Overtaxed halfway houses and other reentry programs are left to pick up the slack. 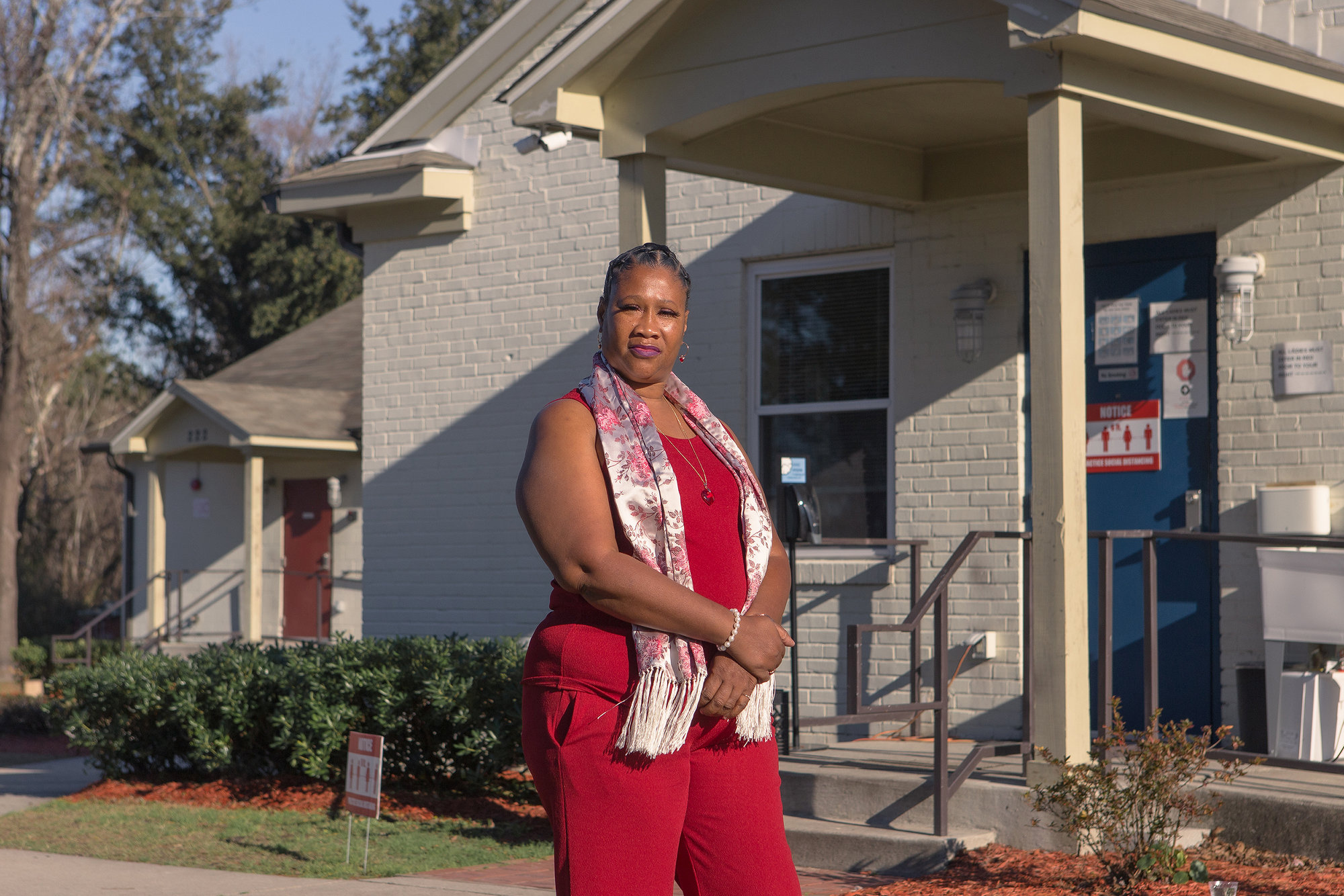 Nacola McNeil in front of the Leading Into New Communities (LINC) transitional housing in Wilmington, NC, in January. Damola Akintunde for The Marshall Project
By Nicole Lewis AND Beth Schwartzapfel

Nacola McNeil warned officials at the North Carolina Correctional Institute for Women that coronavirus was spreading in her unit. "That virus is here,” she says she told corrections officers in the Raleigh-based prison in April. “What makes you think our unit is exempt?”

McNeil says guards shrugged off her concerns, claiming that women showing symptoms were just suffering from allergies. But on April 22, one day after officials announced the first cases at the prison, McNeil and a few others were released in an effort to stop the virus from spreading.

McNeil was not tested before she reported to the dorm-style halfway house where she would serve the last 30 days of her sentence. A few days into her stay, she went to the emergency room for pain in her hip. She ended up testing positive for COVID-19 and was admitted to the hospital.

“I was sharing a room with a bunch of ladies. By the grace of God, no one else got sick,” she said, speaking of the reentry facility. “I should have been tested before leaving prison.”

John Bull, a spokesperson for the North Carolina Department of Public Safety, wrote in an email that people leaving prisons “were not tested on their release in April,” noting that routine prerelease testing did not begin until January 2021. He did not directly respond to questions about guards dismissing McNeil's concerns about the virus.

Even as prisons have proved hotspots of COVID-19, the pandemic has posed new challenges for the people who leave them—and the communities they re-enter. Even as some states have accelerated the release of prisoners to stem contagion, relatively few systematically test or quarantine people before they leave. In turn, reentry facilities and probation and parole systems across the country are scrambling, often with few resources or safety protocols, to prevent further spread of the coronavirus.

The Marshall Project and the Associated Press surveyed all 50 state departments of corrections and the federal Bureau of Prisons (BOP) about their prerelease protocols. Out of the 31 prison systems that responded, 17 states plus the BOP said they’re testing all prisoners before they get out. Twelve states and the BOP said they routinely quarantine people prior to release, and 12 states said they delay the release of parolees who test positive. Just 13 states plus the BOP said they were coordinating discharges with local Departments of Health. And only three states—California, Idaho and North Carolina—said they are providing hotel rooms where people who are positive on release can safely quarantine in the community.

Reentry providers we interviewed told us that the risks of further contagion are high because prisoners are going home to family or to halfway houses and transitional housing units where they share rooms with other formerly incarcerated people. Others may travel hundreds of miles on public transportation to get home.

Prisons have been ravaged by the virus. At least 343,000 people in state and federal facilities around the country have tested positive as of early January, according to reporting by The Marshall Project and The Associated Press. The prison infection rate is more than four times as high as among people on the outside, nationally. In some states, it’s more than 10 times as high.

“We can’t just let [people] out and say, ‘Let’s see what happens.’”” said Emily Wang, a Yale Medical School professor and co-editor of a National Academies of Science, Engineering, and Medicine report on reducing incarceration to reduce the spread of coronavirus.The report emphasized that services like housing, medical and mental health care and financial assistance—always important for a successful prison release—are essential to minimize the risk of spreading COVID-19 between prisons and the wider community.

Under normal circumstances, roughly 600,000 people return home from prison each year. To stop the spread of the virus, some states are releasing people en masse. New Jersey released more than 2,250 people in November. Pennsylvania and Illinois have sent 5,500 and 3,000 people home since March, respectively. And California sent more than 18,000 prisoners home early in 2020.

But reentry providers in several states have cautioned that they aren’t prepared for the surge. Volunteers of America Delaware Valley, a group that runs halfway houses and other post-prison services in New Jersey, pushed back against the mass release bill that state lawmakers passed in October, because the state reduced their funding for job and housing programs even as unprecedented numbers of people were set to get out of prison.

Reentry providers in California are struggling to make room for the thousands of people coming out of prison under order from Gov. Gavin Newsom. The governor’s initiative did not include plans to secure tests or quarantine facilities for people upon release, said Judith Tata, executive director of California Reentry Program.

To make matters worse, Tata says, some transitional housing units won’t accept people without a negative COVID test. The task of screening and quarantining the recently released has fallen on probation and parole offices across the state. Some have enforced strict protocols while others simply don’t have the space or staffing to care for everyone leaving prison. “What this pandemic has done in California is expose a highly dysfunctional system,” Tata said.

Even if all releases followed best practices, reentry programs themselves are being stretched thin. In April, the Council of State Governments Justice Center surveyed reentry providers around the countryabout how the pandemic was affecting their work. Roughly 75 percent of the 126 respondents in 35 states said they had shut down or limited services due to budget cuts. One in five had laid off workers.

As a result, reentry providers have had to make difficult choices. Megan Quattlebaum, who leads the Justice Center, says that at the start of the pandemic some residential programs and halfway houses refused to take people leaving prison. Their refusal put corrections departments in a bind since prisoners cannot be held beyond the end of their sentence. In rare instances, Quattlebaum says, some prison officials wound up releasing people to street homelessness.

“We know that is not setting someone up for success, especially in a pandemic,” Quattlebaum said. “We need transitional housing. We need some realistic pathway out of prison. The issue now is funding these programs.”

Sometimes individuals working for reentry services are forced to choose between their clients’ wellbeing and their own. Stefannie Powell is the executive director of Branch15, which runs several transitional houses in and around Oklahoma City. She said that in August, 15 minutes before she was set to pick up a woman from Eddie Warrior Correctional Facility, a state prison official told her the woman had tested positive for COVID. Powell was wearing a mask but said that had she known sooner, she would have driven a bigger van to create more distance during the three-hour ride.

Powell knew she couldn’t place the woman at the eight-bedroom house she’d been set to occupy because there were other women and their children living there. So Powell, who suspected that she’d already had and recovered from the virus, allowed her client to stay in her guest room.

“Honestly, we just prayed for the best,” she said.

Justin Wolf, a spokesperson for the Oklahoma Department of Corrections, did not respond to questions about the way this release was handled but said that people who have completed their sentences “must be discharged, regardless of whether they have tested positive.”

Limited communications and new COVID restrictions exacerbate risks. Rolling lockdowns prevent phone calls; volunteers can’t come in to assess people pre-release; and case managers often can’t coordinate re-entry plans. “We are unable to have direct phone calls with people getting out or prison officials,” says Kristen Powers, director of the Benevolence Farm reentry organization in Graham, North Carolina. “So we can’t ask: ‘Are you going to test? What are you all doing?’”

Under the best circumstances, returning to life after prison is challenging. Often, people leave prison without proper identification and with little money in their pockets. In the pandemic, these challenges are even more fraught.

North Carolina’s McNeil was lucky. She had a mild case of the virus and spent three weeks recovering and quarantining in a motel room paid for by the Salvation Army. Looking back, she sees her experience as a catch-22. “If they would have tested me and I was positive, would they have let me leave prison early?” she asked.

Bruce Kreitman was released to a Florida halfway house in July after serving eight years in state prison. He wasn’t screened for COVID-19 prior to his release. But when the halfway house asked him whether he had tested negative, Kreitman said yes. “Which was a lie,” he admits. “I didn't want them to tell me I had to wait 14 days because I had nowhere to stay.”