This Scientist Helped Free the Innocent Using DNA. Now Biden Wants Him in the Cabinet.

Some experts hope Eric Lander, the president’s choice for new science adviser, will crack down on bad forensics in courtrooms. 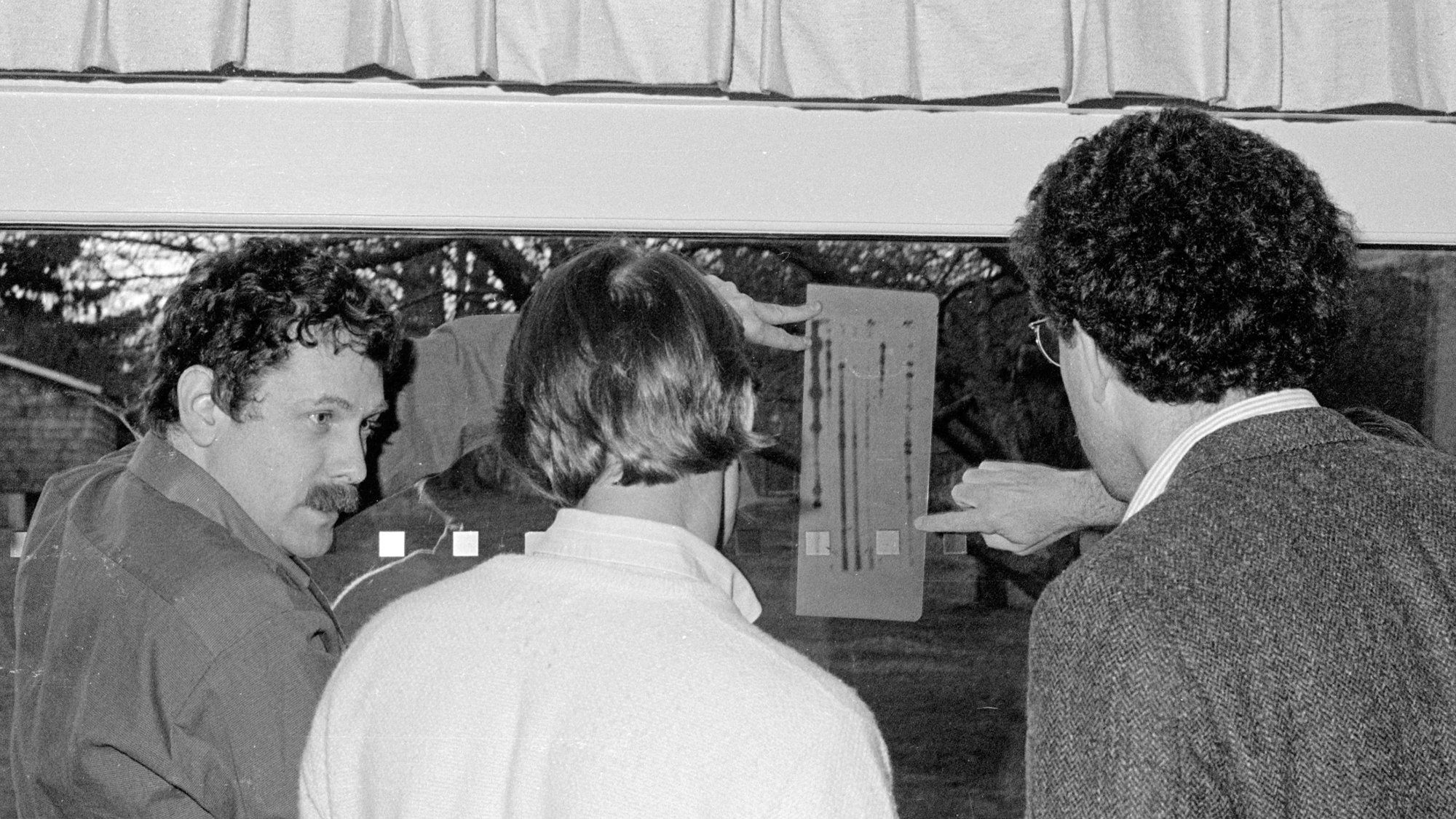 Eric Lander, left, who was just nominated to be President Biden's science adviser, showing Peter Neufeld, right, who went on to co-found the Innocence Project, how to look at DNA in 1988. Courtesy of Cold Spring Harbor Laboratory
By Eli Hager
Looking Back at the stories about, and excerpts from, the history of criminal justice.

In November 1988, at a secretive conference center in the woods in Cold Spring Harbor, New York, a select group of biologists, judges, philosophers and others gathered for three days to debate what was then a brand-new practice: the use of DNA in criminal cases.

Also in attendance were two Bronx criminal defense lawyers who knew very little about science. They were there in part because they were working on a murder case in which the prosecutors were planning to present this novel type of evidence—some blood that had been found on the defendant’s wristwatch, containing bands of DNA.

As the first day of the conference dragged into the late afternoon, records of the event show, many of the speakers were expressing great optimism about what was being called “DNA fingerprinting,” saying that it would allow juries for the first time in history to know to a 100 percent certainty whether an accused person is guilty. Then, a brash, brainy young geneticist named Eric Lander—who three decades later is President Biden’s pick to become the first-ever Cabinet-level science adviser to the president—got up to speak, discarding his prepared remarks and instead dissecting the flaws in others’ arguments.

This was the guy they needed to talk to, the two Bronx lawyers thought. During a coffee break, they pulled Lander aside, asking him if he could take a quick look at the X-ray films of the DNA from their case. “They dragged me into this side room; they locked the door,” Lander recalled years later. “I needed this like a hole in the head.”

Lander reluctantly agreed to help, holding the images up to a window.

He was stunned by what he saw: The DNA did not line up at all. Was a court of law really going to allow this “schmutz,” as he called it, to be presented to a jury?

Lander was radicalized in that moment, he says. Not only did he start helping out with the murder case, eventually convincing the prosecutors’ own experts to admit that the DNA sample was flawed. He also kept teaching these two lawyers for years to come, turning them into the nation’s leading experts on how to use science to protect the wrongfully accused in court.

The two lawyers are Barry Scheck and Peter Neufeld, who went on to found the Innocence Project, the national legal defense organization that has since helped free hundreds of innocent people from prison using DNA.

“Before we met Eric, I would say that Barry’s and my scientific comprehension was somewhere below primate-level,” said Neufeld in an interview with The Marshall Project. “But he taught us to embrace science, and the rest is history.”

More than a half-dozen experts on forensics told The Marshall Project that Biden’s decision to create a Cabinet position for Lander—head of the White House’s Office of Science and Technology Policy—could be an opportunity to establish more rigorous federal standards for using science in the American courtroom. Many are expressing their enthusiasm privately, not wanting law enforcement groups to challenge Lander’s confirmation by the Senate if they catch wind that he is an unsung hero of the innocence movement.

To be sure, Lander, who is better known for his work helping to sequence the human genome, will have plenty of other issues on his plate as Biden’s science adviser—including two enormous ones: the pandemic and climate change.

But he could create a standalone position in his new office that is devoted to forensic science, several experts said. They hope he will continue the work that he started as co-chair of President Obama’s council of science advisers, which published a 2016 report dismissing as “scientifically meaningless” certain courtroom practices in which so-called “experts” hired by prosecutors claim they can match bite marks, shoe prints, handwriting, gun residue and the like to a person accused of a crime.

“Eric’s long-held belief has been that if we’re going to use ‘scientific’ evidence—with all the persuasive power that the word ‘scientific’ has with juries—well, then, it should actually be scientific,” said Jennifer L. Mnookin, dean of the UCLA School of Law and an expert on forensics.

Experts also hope that Lander can use the power of the federal government to help organize and fund rigorous studies of newer types of science being pushed into the criminal justice system, such as risk-assessment algorithms that claim to objectively calculate a defendant’s threat level to society.

Born in Brooklyn and a mathematician by training, Lander largely taught himself genetics, going on to become a professor of the subject at M.I.T. and Harvard. He also founded and directs the Broad Institute, a genomic research center in Cambridge.

But it was not until the conference at the Banbury Center, a science think tank in Cold Spring Harbor, that he became deeply interested in how genetic material was being used to determine guilt and innocence in criminal courts.

After his initial skepticism, Lander dove into the murder case that Scheck and Neufeld were working on, which would become a landmark in the history of DNA evidence. Declining compensation, he kept showing up at the Bronx courthouse, mentoring these fledgling innocence lawyers.

“He was even teaching us—the lawyers—about cross-examination,” said Scheck in an interview with The Marshall Project. “He taught us that if we wanted precise scientific answers, we needed to be using precise scientific language in our questions.”

Ultimately, Lander took the many expert witnesses in the case into a conference room; no lawyers were allowed in. By the time they came out, he had convinced them all to sign onto a joint statement not only saying that the blood on the wristwatch was inconclusive as evidence, but also calling on the National Academy of Sciences to convene a committee to establish best practices for the use of DNA by law enforcement and crime labs.

Within three years, the National Academy, the most prestigious scientific body in the country, had done just that, eventually releasing multiple reports that led courts around the country to adopt a more scrupulous approach to DNA evidence that has now become commonplace.

“He had a vision for all of that, just from this one case,” Neufeld said. “He was responsible more than any other one person for ensuring the quality of that evidence going forward.”

Over the years, as Scheck and Neufeld took on more cases involving DNA (including, famously, O.J. Simpson’s), they kept returning to Lander for guidance. He joined the Innocence Project’s board of directors, helped them write legal briefs and provided expert testimony in cases challenging improper uses of forensic evidence.

Lander has faced controversy in his career, too. Those who know him say his relentlessness in the scientific world can come off as self-promotion, a side of him that came out during the all-out war to be the first to map the human genome. Critics also say that in an article he wrote about the CRISPR gene-editing technology, he gave himself and a colleague too much credit for the project while giving two women scientists from other research institutions not enough. (The women went on to win the Nobel prize in chemistry last year for their work.)

Lander more recently drew criticism for leading a 90th-birthday toast to James Watson, the co-discoverer of the structure of DNA and a founder of the field of genetics, despite Watson’s history of racist and sexist comments. Lander apologized for the toast a week after giving it.

The founders of the Innocence Project and others in forensics say that despite these often bitterly personal controversies within the scientific community, Lander’s passion usually arises from the science itself.

“What he’s been doing in terms of forensic science seems selfless to me,” said William C. Thompson, a forensics expert and law professor at the University of California, Irvine. “Not many people even know he does this work. He just does it because he is strongly offended by bad science.”

Experts also said there is no one better than Lander at translating complex science for non-scientists—and turning it into public policy. When he was on the President’s Council of Advisors on Science and Technology during the Obama administration, the then-president saw him as a great explainer and peppered him with questions, according to several of those present for their meetings.

This skill might be particularly useful in persuading an American public weaned on CSI and Law & Order that supposed forensic evidence like bite marks and tire tracks are junk science.

“He’s one of the best lawyers I’ve ever met who isn’t a lawyer—because of his ability to teach,” said Scheck. “Which is why it was so extraordinarily lucky that we happened to meet him that day in Cold Spring Harbor.”