Omicron Has Arrived. Many Prisons and Jails Are Not Ready.

Experts fear “another potential tinderbox scenario” akin to the early days of the pandemic. 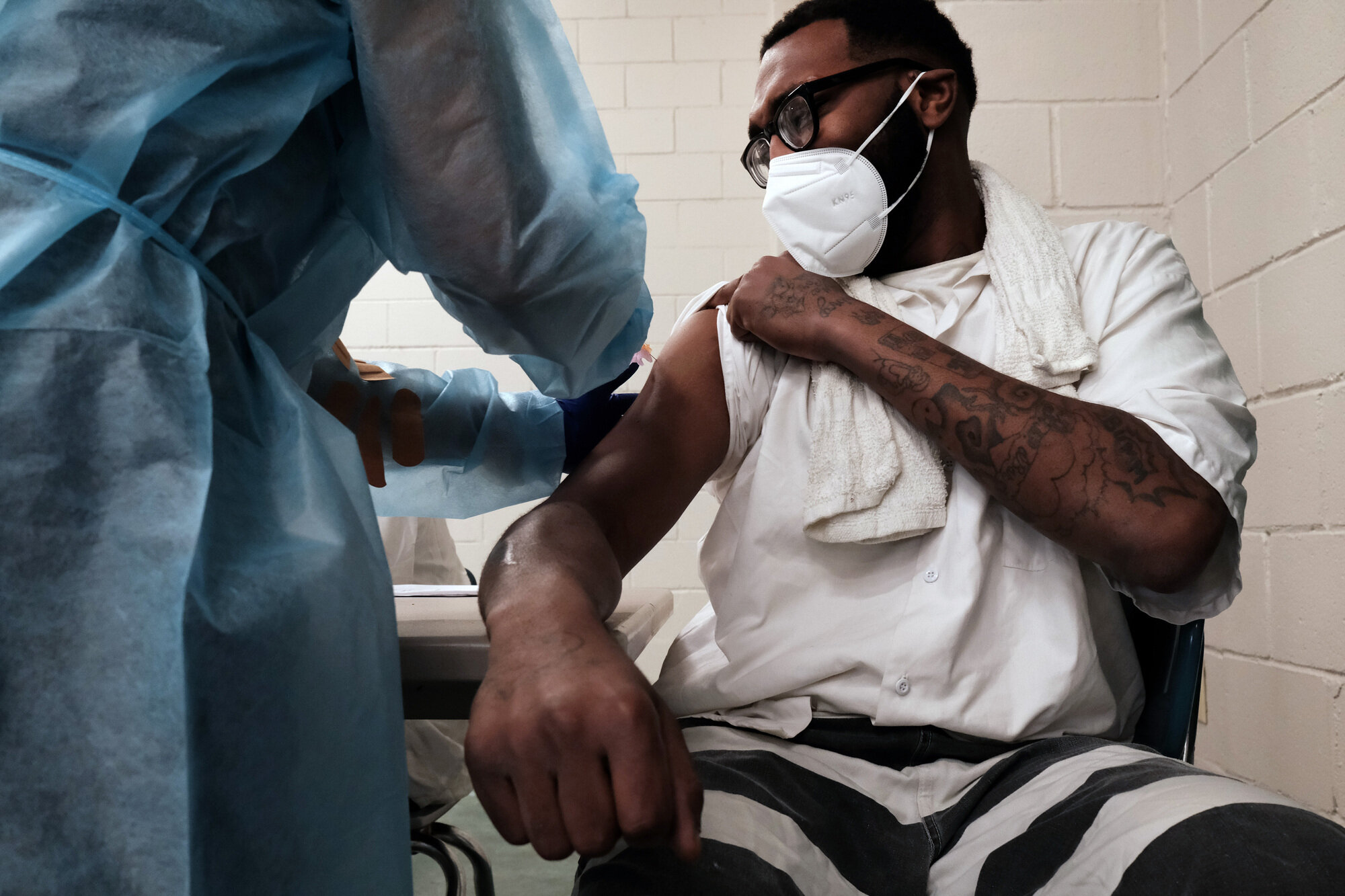 In the Philadelphia jail, the number of COVID-19 cases has tripled in the last two months. In Chicago’s lockup, infections have increased 11-fold in the same period. And in New York, city jails are struggling with a mushrooming 13-fold increase in less than a month.

From local lockups in California to prisons in Wisconsin to jails in Pennsylvania, COVID-19 is once again surging behind bars, posing a renewed threat to a high-risk population with spotty access to healthcare and little ability to distance.

At this point it’s unclear whether the surge in infections is due to the highly contagious omicron variant. Still, as caseloads across the country skyrocket and omicron becomes the dominant variant, experts worry the coronavirus is once again poised to sweep through jails and prisons. As in the world outside prison bars, many incarcerated people are struggling with pandemic fatigue. They’re also facing uncertain access to booster shots, widespread vaccine hesitancy and pandemic-driven staffing shortfalls that have created even harsher conditions.

As with previous iterations of the virus, everything about prisons and jails makes them a setup to magnify the harms of omicron. “The overcrowding. The poor sanitary conditions. The lack of access to health care,” said Monik Jimenez, an epidemiologist at Harvard’s School of Public Health. “Masking is only going to do so much when you have people on top of you.”

Though scientists warn that the new variant is far more contagious than previous ones, a half dozen prisoners who spoke with The Marshall Project for this story said they hadn’t noticed any widespread concern about it at this point and that prison officials had given them little information.

“They're not telling us anything about omicron or anything else for that matter,” wrote Rachel Padgett, a federal prisoner in Florida. Many pandemic-weary prisoners said they were less concerned about catching the virus than about being locked down because of it, once again facing months confined to their cells and bunks with no way to call home, see their families or go outside.

“That’s the only part people are worried about these days — taking away our rec,” said a man incarcerated in a federal prison in Mississippi who asked not to be named for fear of retaliation from prison officials.

For some, it’s hard to get worried again considering how bad things got in some prisons before. John J. Lennon recalled the end of last year when the virus seemed particularly relentless, making the people incarcerated with him in upstate New York fearful and anxious. All that’s changed. “There is no sense of urgency about it,” he said.

“I haven’t seen watery eyes coming off the phones anymore. There aren’t ambulances coming in and out,” said Lennon, a journalist who is a contributing writer to the Marshall Project and Esquire. “There was a time when that’s what I saw every day.”

Though some early reports suggested that omicron may cause less severe disease, there are also indications that the new variant is better able to evade vaccines – which means that access to booster shots is even more important. But there is little good public information about how widely boosters are available to incarcerated people or how widespread booster uptake is among correctional staff, many of whom resisted vaccination in the first place.

Though officials in more than half a dozen prison systems – including New York, Texas and Arkansas – said they’d offered booster shots to prisoners, not all were able to specify how many received them so far. In Nebraska, inspector general Doug Koebernick said prisoners have only been offered access to the Johnson & Johnson booster shot, which early research suggests is the least effective against the new variant.

The CDC recently said the 2-dose Pfizer and Moderna vaccines are preferred over the Johnson & Johnson. Homer Venters, a former New York City jail medical director and correctional healthcare consultant, said that makes the coming months “a lot trickier for the people who are trying to engage with people behind bars and promote vaccination, which is crucial to prevent omicron.”

Aside from the lack of data about booster availability, many states that routinely released real-time data about infections and vaccinations in the first year of the pandemic are now releasing information monthly or not at all, said Lauren Brinkley-Rubinstein, an associate professor and co-founder of the COVID Prison Project at the University of North Carolina School of Medicine. “We basically know nothing, and it’s really disheartening in that we have less and less data every day,” she said.

Even so, the ripple effects of the mutating virus could soon become clear.

“If the slope of the curve with omicron is as steep as we fear it is, we may have some really devastating staff shortages,” said Venters, who has been performing court-ordered COVID-19 prison inspections since the beginning of the pandemic. “With large numbers of staff unavailable to work very quickly, you can’t actually do any of the jobs of running the facilities.” Venters said to expect large scale lockdowns or “very serious security consequences.”

For several prison systems, the dwindling number of guards has already been a problem. In Texas, longstanding staff shortages exacerbated by the pandemic have created unsafe conditions for prisoners and workers alike. For the first time in recent memory, the Texas agency that runs state prisons is down more than 7,200 officers, leaving several facilities at less than half-staff and relying on overtime. Jeff Ormsby, executive director for the state’s biggest union representing corrections employees, said officers are “more likely to die from a car wreck going home from a 24-hour shift than to die from omicron.”

Meanwhile, populations of people in prison and jail have crept back toward pre-pandemic levels in many places, after early efforts to keep as many people out of jail as possible and to release people from prisons en masse as a tactic to stem the spread of coronavirus. By the middle of last year, the number of people in jails nationwide was down by roughly one-quarter — its lowest point in more than two decades. And, from 2019 to 2020, the number of new prisoners admitted to state and federal prisons went down by 40%.

Now, courthouses are slogging through the backlog of cases that accumulated while they were closed, leading to many new people entering the system. Systems set up to process plea bargains have returned to business as usual. And new spikes in certain violent crimes — and public fears of violence — have put pressure on city leaders across the country to call for additional policing.

So with omicron poised to sweep through the nation’s lockups, they are increasingly crowded — a dangerous setup for the virus’s spread, said Jaimie Meyer, an epidemiologist and infectious disease doctor at Yale medical school. “We’re looking at another potential tinderbox scenario.”