Public health experts worry that high refusal rates could undermine efforts to control the pandemic inside and outside of prisons. 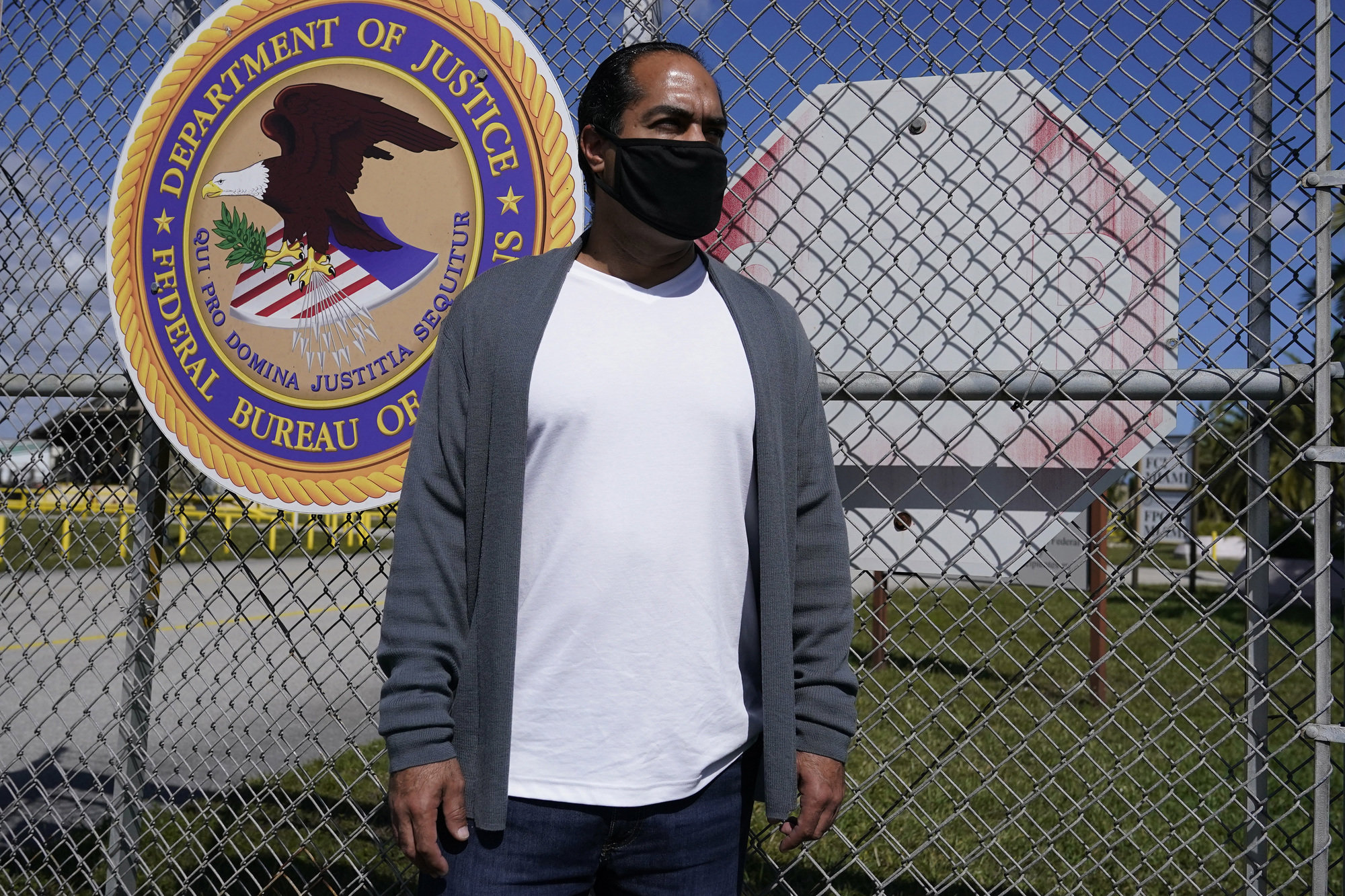 Kareen Troitino, the corrections officer union president for FCI Miami, stands outside the federal prison on March 12, 2021. Marta Lavandier/Associated Press
By Nicole Lewis AND Michael Sisak
Additional reporting by Beth Schwartzapfel AND Tom Meagher
How the coronavirus compounded the failings of the criminal justice system.

A Florida correctional officer polled his colleagues earlier this year in a private Facebook group: “Will you take the COVID-19 vaccine if offered?”

In Massachusetts, more than half the people employed by the Department of Correction declined to be immunized. A statewide survey in California showed that half of all correctional employees will wait to be vaccinated. In Rhode Island, 30% of prison staff have refused the vaccine, a higher rate than the incarcerated, according to the state’s Department of Corrections. And in Iowa, early polling among employees showed a little more than half the staff said they’d get vaccinated.

This story was published in partnership with Associated Press.

As states have begun COVID-19 inoculations at prisons across the country, corrections employees are refusing vaccines at alarming rates, causing some public health experts to worry about the prospect of controlling the pandemic both inside and outside. Infection rates in prisons are more than three times as high as in the general public. Prison staff helped accelerate outbreaks by refusing to wear masks, downplaying people’s symptoms, and haphazardly enforcing social distancing and hygiene protocols in confined, poorly ventilated spaces ripe for viral spread.

The Marshall Project and The Associated Press spoke with correctional officers and union leaders nationwide, as well as with public health experts and doctors working inside prisons, to understand why officers are declining to be vaccinated, despite being at higher risk of contracting COVID-19. Many employees spoke on the condition of anonymity because they feared they would lose their jobs if they spoke out.

In December and January, at least 37 prison systems began to offer vaccines to their employees, particularly front-line correctional officers and those who work in health care. More than 106,000 prison employees in 29 systems, including the Federal Bureau of Prisons, have received at least one dose of a COVID-19 vaccine, according to data compiled by The Marshall Project and The Associated Press since December. That number is likely an undercount because 40% of the states are not reporting information on how many of their employees are inoculated. And some states are not tracking employees who get vaccinated in a community setting such as a clinic or pharmacy.

Still, some correctional officers are refusing the vaccine because they fear both short- and long-term side effects of the immunizations. Others have embraced conspiracy theories about the vaccine. Distrust of the prison administration and its handling of the virus has also discouraged officers from being immunized. In some instances, correctional officers said they would rather be fired than be vaccinated.

The resistance to the vaccine is not unique to correctional officers. Healthcare workers, caretakers in nursing homes and police officers — who have witnessed the worst effects of the pandemic — have declined to be vaccinated at unexpectedly high rates.

The refusal of prison workers to take the vaccine threatens to undermine efforts to control the pandemic both inside and outside of prisons, according to public health experts. Prisons are coronavirus hot spots, so when staff move between the prisons and their home communities after work, they create a pathway for the virus to spread. More than 388,000 incarcerated people and 105,000 staff members have contracted the coronavirus over the last year. In states like Michigan, Kansas and Arizona, that's meant 1 in 3 staff members have been infected. In Maine, the state with the lowest infection rate, 1 in 20 staff members tested positive for COVID-19. Nationwide, those infections proved fatal for 2,474 prisoners and at least 193 staff members.

“People who work in prisons are an essential part of the equation that will lead to reduced disease and less chance of renewed explosive COVID-19 outbreaks in the future,” said Brie Williams, a correctional health expert at the University of California, San Francisco (UCSF).

At FCI Miami, a federal prison in Florida, fewer than half the facility’s 240 employees had been fully vaccinated as of March 11, according to Kareen Troitino, the local corrections officer union president. Many of the workers who refused had expressed concerns about the vaccine’s efficacy and side effects, Troitino said.

In January, Troitino and FCI Miami warden Sylvester Jenkins sent an email to employees saying that “in an act of solidarity,” they had agreed to get vaccinated and encouraged staff to do the same. “Even though we recognize and respect that this motion is not mandatory; nevertheless, with the intent of promoting staff safety, we encourage all staff to join us,” the Jan. 27 email said.

Only 25 employees signed up as a result of the email. FCI Miami has had two major coronavirus outbreaks, Troitino said: last July, when more than 400 prisoners out of 852 were suspected of having the disease, and in December, when about 100 people were affected at the facility’s minimum-security camp.

Because so many correctional officers and prisoners haven’t been vaccinated, there are fears that could happen again. “Everybody is on edge,” Troitino said. Though he’s gotten the shot, he’s worried about another outbreak and the impact on already stretched staffing at the prison.

The pandemic has strained prisons already struggling with low staffing rates and subpar health care. Low vaccination rates among officers could push prisons to their breaking point. At the height of the outbreak behind bars, several states had to call in the National Guard to temporarily run the facilities because so many staff members had called out sick or refused to work.

At FCI Miami, officers are constantly shuttling sick and elderly prisoners to the hospital, Troitino said. As a result, a skeleton crew of staff is left to operate the prison. Unvaccinated staff only compound the problem as they run the risk of getting sick when outbreaks crop up in the prisons.

“A lot of employees get scared when they find out, ‘Oh, we had an outbreak in a unit, 150 inmates have COVID,’” Troitino said. “Everybody calls in sick.”

Part of the resistance to the vaccine is widespread misinformation among correctional staff, said Brian Dawe, a former correctional officer and national director of One Voice United, a policy and advocacy group for officers. A majority of people in law enforcement lean right, Dawe said. “They get a lot of their information from the right-wing media outlets,” he said. “A lot of them believe you don’t have to wear masks. That it’s like the flu.” National polls have shown that Republicans without college degrees are the most resistant to the vaccine.

Several correctional officers in Florida, speaking on the condition of anonymity because they are not permitted to talk to the press, said many of their colleagues believe that the vaccine could give them the virus. Some have latched onto debunked conspiracy theories circulating on social media, the officers said, believing the vaccine contains tracking devices produced by former Microsoft CEO Bill Gates, who has donated to coronavirus treatment research. (The vaccine does not contain tracking devices.) Others believe the vaccine was hastily produced without enough time to understand the long-term side effects.

“I wouldn’t care if I worked in a dorm with every inmate having COVID, I still wouldn’t get (vaccinated),” said a correctional sergeant who has worked for the Florida Department of Corrections for more than a decade. “If I’m wearing a mask, gloves, washing my hands and being careful — I’d still feel better working like that than putting the vaccine in my body.”

Officer attitudes about the vaccine are so widespread that researchers at UCSF have created a frequently asked questions flyer for the incarcerated that includes: “I heard the guards/officers … at my facility are refusing to get the vaccine. If they aren’t getting it, why should I?” The researchers encourage the incarcerated to learn as much as they can about the vaccine and to make their own decision “regardless of what other people are doing.”

Public health experts have urged states to prioritize vaccinations in prisons and jails but cautioned against prioritizing staff over prisoners. Though numbers aren’t available from many states, at least 15 began vaccinating staff before the incarcerated, The Marshall Project and The Associated Press found. “We know they have anti-vax ideations and attitudes,” said Lauren Brinkley-Rubinstein, who leads the COVID Prison Project, which tracks correction officials' responses to the pandemic. “We have said again and again, we shouldn’t have this two-tier system.”

But guards’ refusal to be vaccinated has been a blessing for some incarcerated people. The vaccines have a short shelf life after being thawed out, so officials have offered the leftover vaccines to prisoners instead of letting them go to waste. Julia Ann Poff is incarcerated at FMC Carswell, a federal prison in Texas for women with special medical and mental health needs, for sending bombs to state and federal officials. She said she received her first shot in mid-December, after several officers declined.

“I consider myself very blessed to have received it,” she wrote, using the prison’s email system. “I have lupus and a recent diagnosis of heart disease, so there was no way I could afford to let myself get (sick).”

Misinformation and conspiracy theories aside, some officers in federal prisons say they are refusing the vaccine because they do not trust the prison administration. The Federal Bureau of Prisons has come under fire by employees and the incarcerated for its response to the coronavirus. Among the criticisms: a lack of masks and soap in the pandemic’s early days, broken thermometers at one facility and sick prisoners who say they were bunched together without social distancing.

At FCI Mendota, a medium-security federal prison near Fresno, California, officials closed off the main employee entrance in January, funneled the employees through a visiting room turned vaccination clinic and forced them to decide on the spot whether to get vaccinated. Employees weren’t allowed to proceed to their posts without either getting vaccinated or signing a form declaring they refused the vaccine.

Employers cannot mandate that staff get vaccinated. So correctional officers' refusal puts incarcerated people at risk as they have no way of protecting themselves from unmasked and unvaccinated officers. By December, 1 in 5 incarcerated people had contracted the coronavirus, according to data compiled by The Marshall Project and The Associated Press.

Correctional officers can bring the virus home from work and infect family members, too. In extreme cases, those family members themselves become seriously ill or even die. At least five family members of correctional employees have died of COVID-19 since the start of the pandemic, according to the online memorial Mourning Our Losses, which tracks COVID-19 deaths among those who live and work in prisons and jails. In one instance, a Florida correctional officer and his wife died in side-by-side intensive care rooms on the same day.

For some officers, these life and death experiences are a wake-up call. At FCI Miami, where Troitino leads the local officers’ union, several employees contracted the virus or were hospitalized for COVID-19 after officials encouraged them to get vaccinated in late January but they refused. Some of those employees have expressed a change of heart about the vaccine.

“They have called me begging to have the vaccine reserved for them upon their return,” Troitino said. “A few faced life and death and are totally devastated by their experience.”

This story has been updated to clarify that 25 employees signed up for vaccines at FCI Miami in response to an initial email. It has also been updated to note that 30% of Rhode Island correctional officers had declined vaccines offered by the corrections department.