She Tried to ‘Humanize’ Prisons in Oregon. Can She Fix the Federal System?

Inspired by European models, the new Bureau of Prisons director built a Japanese garden in one penitentiary and made official language less demeaning. But some are skeptical of lasting reform. 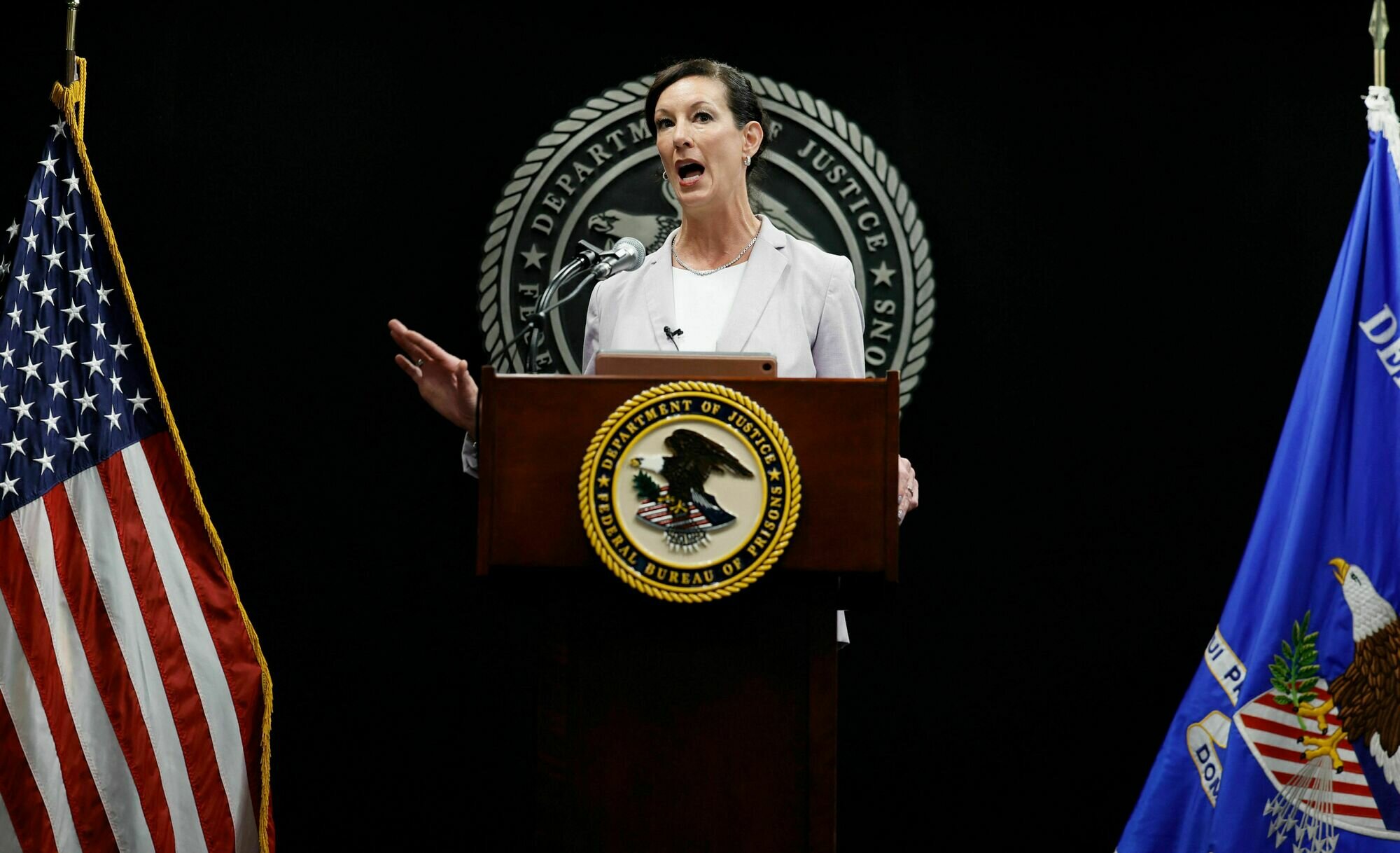 Colette Peters delivers remarks in Washington, D.C., on Tuesday after being sworn in as the new federal Bureau of Prisons director. Pool photo by Evelyn Hockstein
By Keri Blakinger
Additional reporting by Maurice Chammah

When the embattled head of the federal Bureau of Prisons stepped down earlier this year, many hoped his replacement would be someone able to overhaul the scandal-plagued federal system.

The final pick — Oregon prison director Colette Peters — seemed to fit the bill. During her 10 years at the helm of the state corrections department, Peters burnished a reputation as a reformer, vowing to reduce the use of solitary confinement and of the potentially stigmatizing word “inmate.” Like her counterparts in California and North Dakota, she made headlines by visiting Norway in the hope of bringing a gentler model of incarceration back to the United States.

“We know so much more about what works in corrections than we did 10 years ago,” Peters said at her swearing-in ceremony on Tuesday. “Our job is not to make good inmates. It’s to make good neighbors.”

But American prisons are still a long way from Europe’s, and even the most innovative corrections leaders here have overseen horrific living conditions in their prisons and abuse from their staff. In picking Peters to run the Bureau of Prisons, the Biden administration has brought local and state debates to a national stage: Can this new generation of prison leaders, who use words like “dignity” and “humanity,” actually make lives better for the men and women under their control?

Given the state of the federal prison system, experts are skeptical. Under former Bureau of Prisons director Michael Carvajal, the agency came under scrutiny for a growing number of escapes and suicides, as well as problems stemming from short-staffing, a slew of employee arrests, persistent sex abuse scandals and poor handling of the pandemic.

“You can’t reform something that broken,” John Wetzel, who adopted some Norwegian practices while running Pennsylvania’s prisons for a decade, told The Marshall Project. “It’s not a reform situation — it’s a stabilize-a-very-broken-system situation.”

And even though Justice Department officials touted Peters as a “visionary leader” with an eye toward rehabilitation when they announced her appointment, critics have raised questions about whether she’s really lived up to her ideals in Oregon.

“Federal elected officials have been concerned about issues of harassment, discrimination, retaliation and sexual assault at the Bureau of Prisons,” said Sandy Chung, executive director of the ACLU of Oregon. “We’re seeing many of these same issues at the Oregon Department of Corrections — and if under her long tenure, Colette Peters has not been able to adequately address these issues here, how do we expect that she’s going to do that at a federal level with a much bigger system?”

So far, Peters has not said publicly whether she has a plan to reform the federal prisons, and through a spokesman she declined to comment for this story.

A former youth corrections director, Peters took over Oregon’s adult prisons in 2012, becoming the first woman to oversee the billion-dollar agency. During her early years in the job, the Oregon Department of Corrections faced criticism for over-reliance on solitary confinement, widespread officer misconduct, security gaps and mail rules so restrictive that a federal court found them unconstitutional.

Then in 2017, at the urging of an advocacy group in California, Peters and a cadre of corrections staff visited Norway to learn about a rehabilitation-focused prison philosophy in a country with a far lower recidivism rate. It was part of a movement of corrections leaders from across the country who were touring European prisons, looking for ideas to bring back home. The result was mostly modest experiments: Connecticut opened a unit where older prisoners mentored young adults, while North Dakota let some prisoners live in dormitory-style housing. Many leaders were candid that they wanted to do more, but were constrained by politics (most are appointed by governors) and skepticism from their staff.

For her part, though, Peters launched an initiative dubbed “The Oregon Way,” with the goal of “humanizing and normalizing” life in prison. The agency opened a Japanese garden at the state penitentiary, rearranged housing areas to keep officers from being alone on long shifts, dismantled death row and pushed the legislature to pass a bill replacing the word “inmate” with “adult in custody.”

To some outside experts, those shifts all showed an important interest in change that bodes well for Peters’ future in the federal system.

“Is she somebody who’s interested in bringing the bureau to a different place? Yes, I believe she is,” said Brie Williams, a University of California San Francisco professor who helped spearhead the Norway trip through the university’s Amend program, which aims to change the culture inside jails and prisons.

But to some within Peters’ department, the changes seemed superficial. In an unsigned email exchange with The Marshall Project, leaders of a prison workers’ union panned the reforms as “lipstick on a pig.” And Nathaline Frener, a high-ranking agency official who Peters fired on her last day, said she was disappointed by the administration's “lack of interest” in maintaining concrete goals to implement the Norwegian philosophies. Reformers outside the agency shared similar concerns.

“If we’re talking about actual culture change, actual improvements to the conditions of care and custody, I haven’t seen anything,” said Bobbin Singh, director of the Oregon Justice Resource Center. “It’s actually getting worse.”

Singh chalked up part of that decline to changes stemming from COVID-19 and a lack of staff, both problems that make it harder to deliver programs and basic services to people behind bars. But part of the problem, he said, is a larger cultural issue that can be difficult for any one leader to overcome.

One example of that, Singh said, is the case of Mark Wilson, who was put in solitary confinement for four months after a state employee made a joke implying that he spent too much time making phone calls for his prison job as a legal assistant.

That length of stay in solitary — especially for a non-violent infraction — runs contrary to European norms and is long enough to be considered torture by the United Nations. And though she wasn’t personally responsible for the decision to place Wilson in segregation, Peters later defended the move, telling a legislative committee that even such a minor violation could lead “to the erosion of the safety of everyone, and often leads to further criminal behavior.”

While Wilson’s case garnered attention in part because it led to a federal lawsuit, state data shows that the agency still relies heavily on solitary confinement. Even after years of working to minimize the use of segregation and to improve conditions there, roughly one-third of Oregon prisoners were sent to solitary confinement last year. That’s a sizable decrease from 2017, when 45% of the population got put in solitary — but it still means more than 4,000 people spent time in isolation in 2021.

Whatever her record in Oregon, though, federal prison insiders say it would be hard to replicate state tactics in the federal system — in part because the federal system, which comprises more than 120 facilities housing 157,700 prisoners, is roughly 13 times the size of Oregon's.

“In Oregon, their processes are quite a bit different because we have so much red tape and bureaucracy,” said Aaron McGlothin, president of the employee’s union at FCI Mendota in California.

But Kevin Ring, director of the prisoner advocacy organization known as FAMM, said that worrying about who runs the Bureau of Prisons may be focusing on the wrong problem.

“I’m less concerned about who the BOP director is than whether we have an independent oversight mechanism in place,” Ring said. Though the bureau has an inspector general to perform audits, Ring has been pushing for legislation that would create an oversight body with the authorization and funding to do regular site visits and unannounced inspections. “Nothing good happens in the dark,” he added, “and BOP is the darkest place.”

Peters, for her part, seems to agree. “I believe in transparency,” she announced Tuesday, saying she wants to work with Congress and other outside oversight. “I know we cannot do this work alone.”