The deep freeze has been terrible for many Texans, but prisoners have little way to get warm. 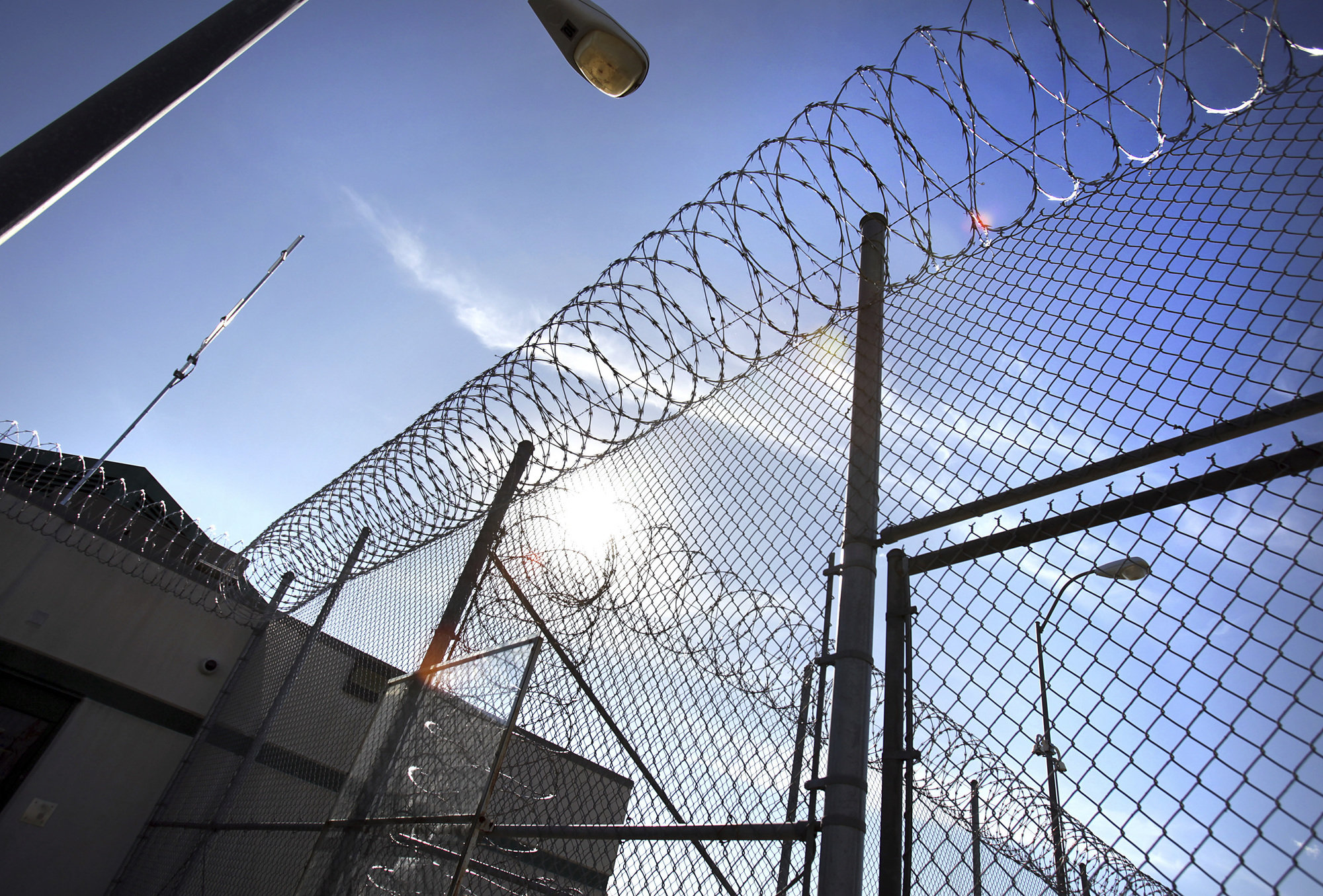 At the Polunsky Unit in Livingston, Texas, prisoners have told their families that they have gathered snow into buckets so that they can flush dorm toilets. Bob Owen/Houston Chronicle, via Associated Press
By Keri Blakinger

Prisoners are defecating in paper bags and overflowing toilets, there aren’t enough extra blankets to go around, and mess hall kitchens are churning out half-rations of unidentifiable cold food.

As a once-in-a-generation snowstorm walloped the Lone Star State this week and led to widespread power outages, prisoners and corrections officers agree: Already-dire conditions inside Texas prisons somehow got even worse.

The story was published in partnership with Daily Beast.

Officials said 33 prisons lost power and 20 had water shortages after the state’s electrical grid failed for several days during single-digit temperatures. Though the Texas Department of Criminal Justice said generators kept electricity on, staff, prisoners and their families reported frigid—and increasingly horrific—conditions around the system.

“The heaters aren't working, there's no showers, everybody's locked in the cell,” said one prisoner, who asked not to be identified for fear of retaliation. Between buildings, he added, “They're dumping table salt on the ice to thaw it out, trying to make the walkways passable.”

An agency spokesman did not respond to questions about prisoner complaints.

The state’s prison system was in bad shape long before the storm began. One prison had fallen into such disrepair that last year the state closed it instead of shelling out $30 million to fix it. Hundreds of other buildings don’t have basic safety features like fire alarm systems or functional locks.

COVID-19 has made things worse. Since the start of the pandemic, at least 40 staff and 187 prisoners have died, and a quarter of all prisoners have tested positive for the virus. The agency has been struggling with an unprecedented staffing shortage, weeks-long lockdowns and continuing complaints about moldy and meager bagged meals.

Then came the deep freeze.

As blackouts swept the state and left more than 4 million Texansin the dark, dozens of prisons began losing power as well. A corrections officer at one unit said that backup generators didn’t go on as planned. Even when they did, aging or shoddy ductwork left some cells so cold the men shivered while wearing all of the clothing they owned.

Unlike people in the free world, prisoners have almost no options to stay warm if there isn’t heat. They can’t go to cars, hotels or warming centers; they can’t huddle together; and they can’t necessarily get more blankets or layers. Even though the prison system’s spokesman said staff distributed extra blankets and jackets to everyone, current and former staff at several units said that wasn’t possible because there weren’t enough to go around.

“It's been so cold for so long that my fingertips are cracking and bleeding,” one man imprisoned near Houston said Thursday. He asked not to be named for fear of retaliation, as he was communicating through a contraband cell phone at a time when regular phone lines were down or inaccessible to many prisoners.

As the weather worsened, fewer corrections officers showed up to work, exacerbating the understaffing and making it harder for workers to take care of the men and women behind bars.

One officer, who asked not to be named for fear he would be fired, complained that only one person turned up for work during a day shift at the Marlin Unit, which forced others to stay and cover the facility’s basic security needs.

Across the state, officers were sometimes forced to work 16 or more hours and threatened with write-ups if they didn’t come in, said Jeff Ormsby, a union leader. “They’re being held hostage basically and told they’d be fired if they go home,” he said.

“This is the reason you’re 5,500 officers short. It’s not the pay, it’s not the benefits, it’s the way you treat your staff.”

The agency says its emergency plans sometimes mean workers have to stay on site during crisis events, but that they’re always paid for that time.

“It is emergency policy,” said Jeremy Desel, a spokesman for the prison system. “The same thing happens during hurricanes.”

And—just as during hurricanes—as more staff called out or couldn’t make it to work, conditions behind bars declined. One officer said staff at her unit weren’t able to pass out medication for more than a day, and several staff members and prisoners said the food had become largely inedible and sometimes unidentifiable.

“They’ve been eating pancakes for two days,” said Kirsten Ricketts, a 51-year-old from East Texas whose husband is in prison at the Polunsky Unit northeast of Houston. “Today was a pancake and a piece of baloney and a piece of cornbread for dinner.” 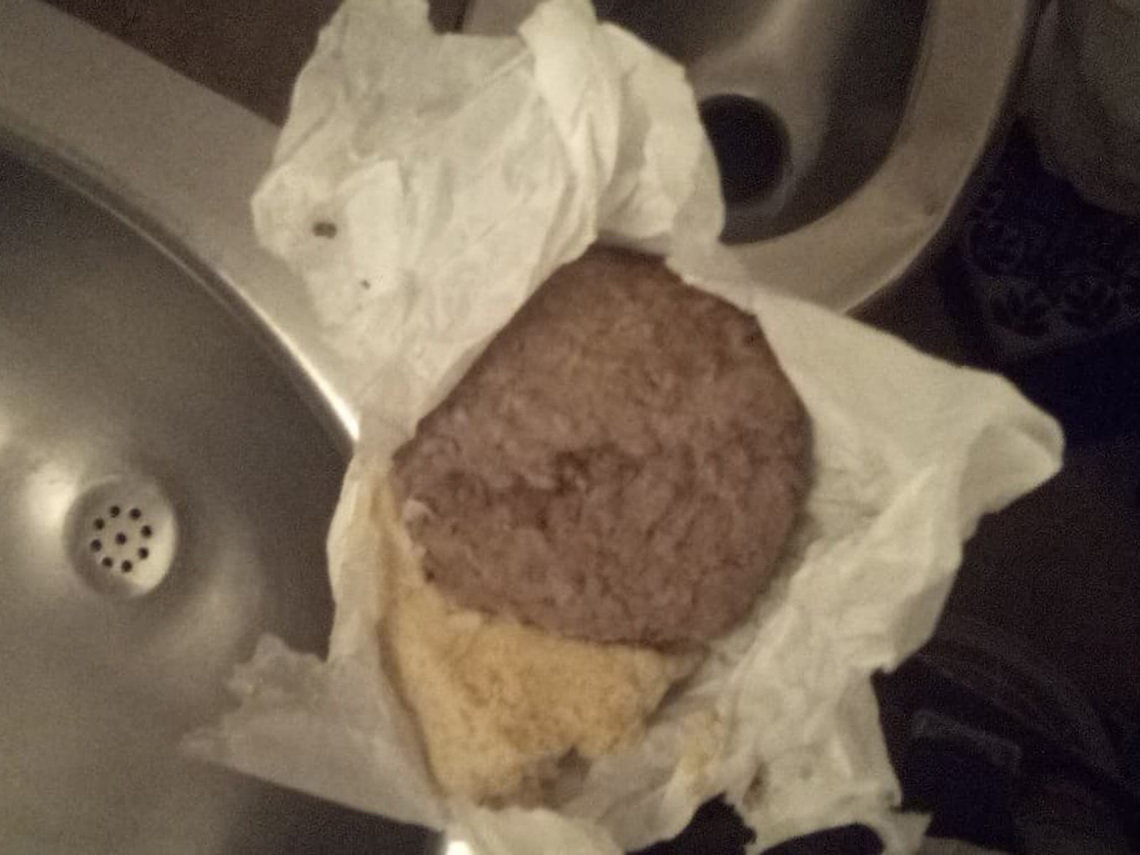 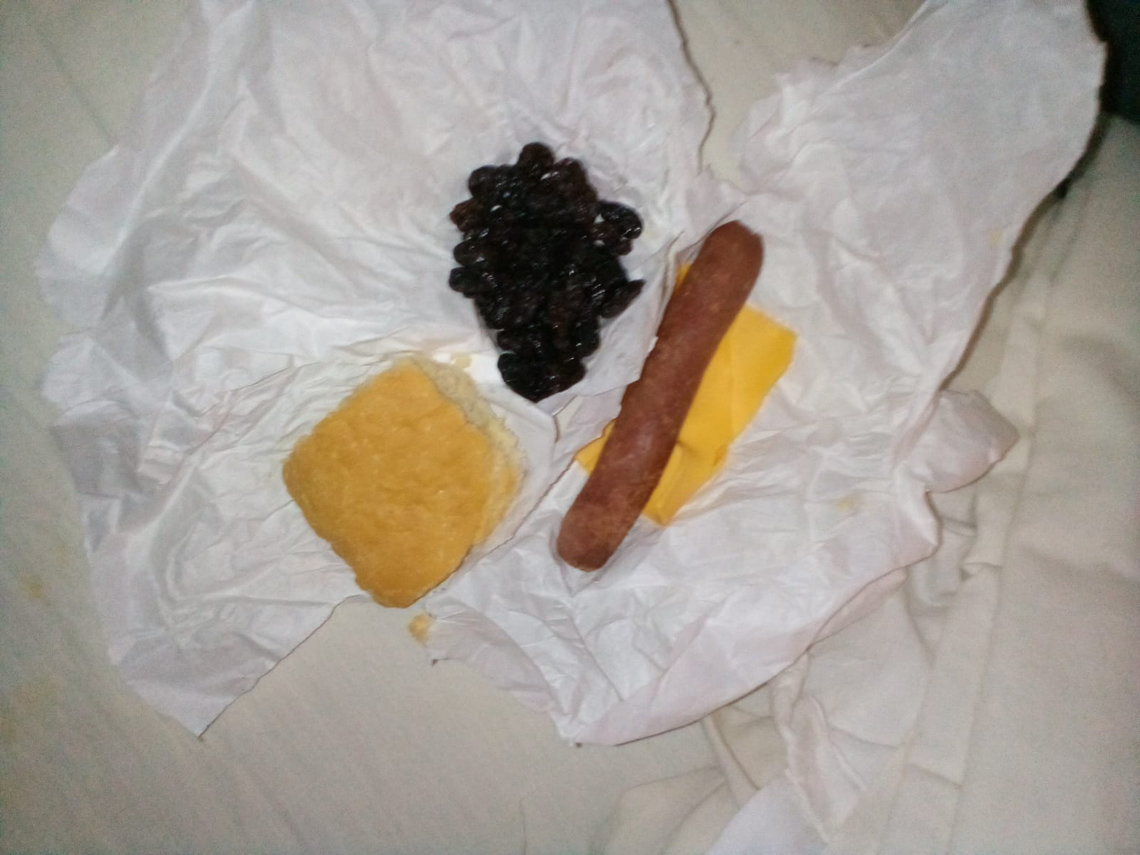 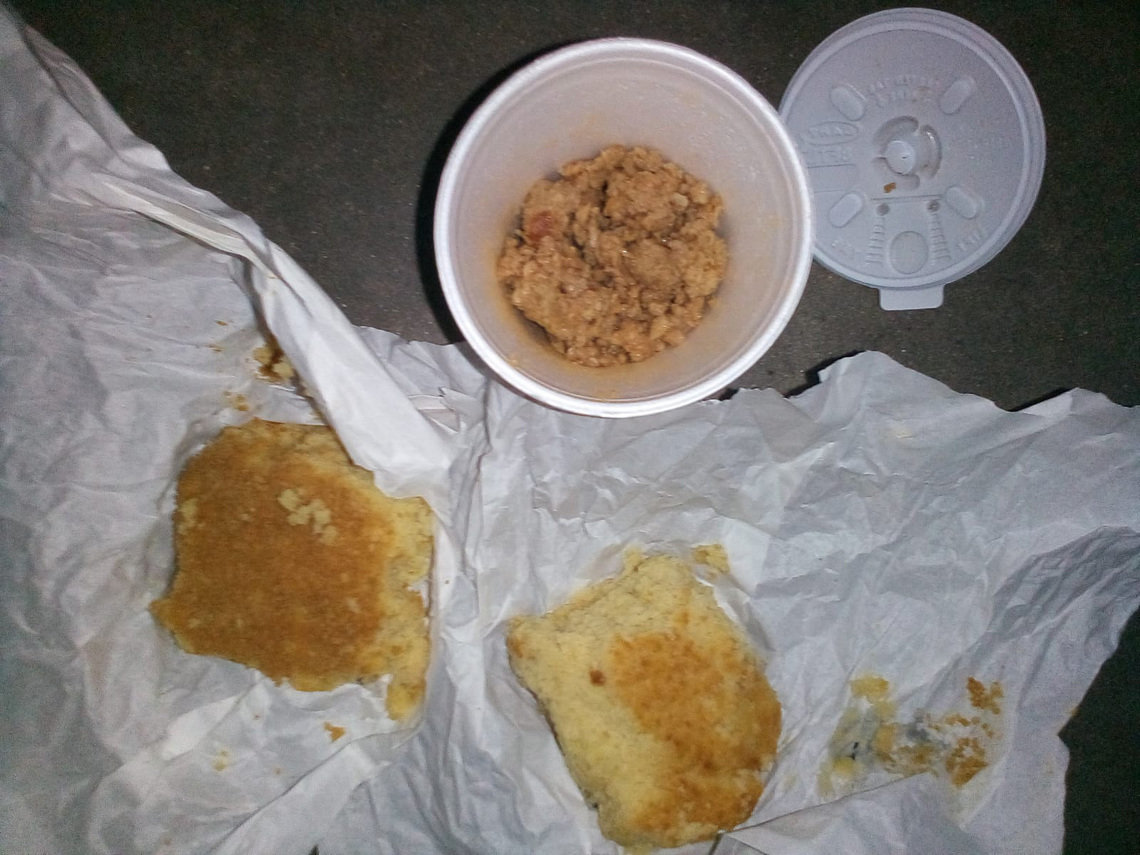 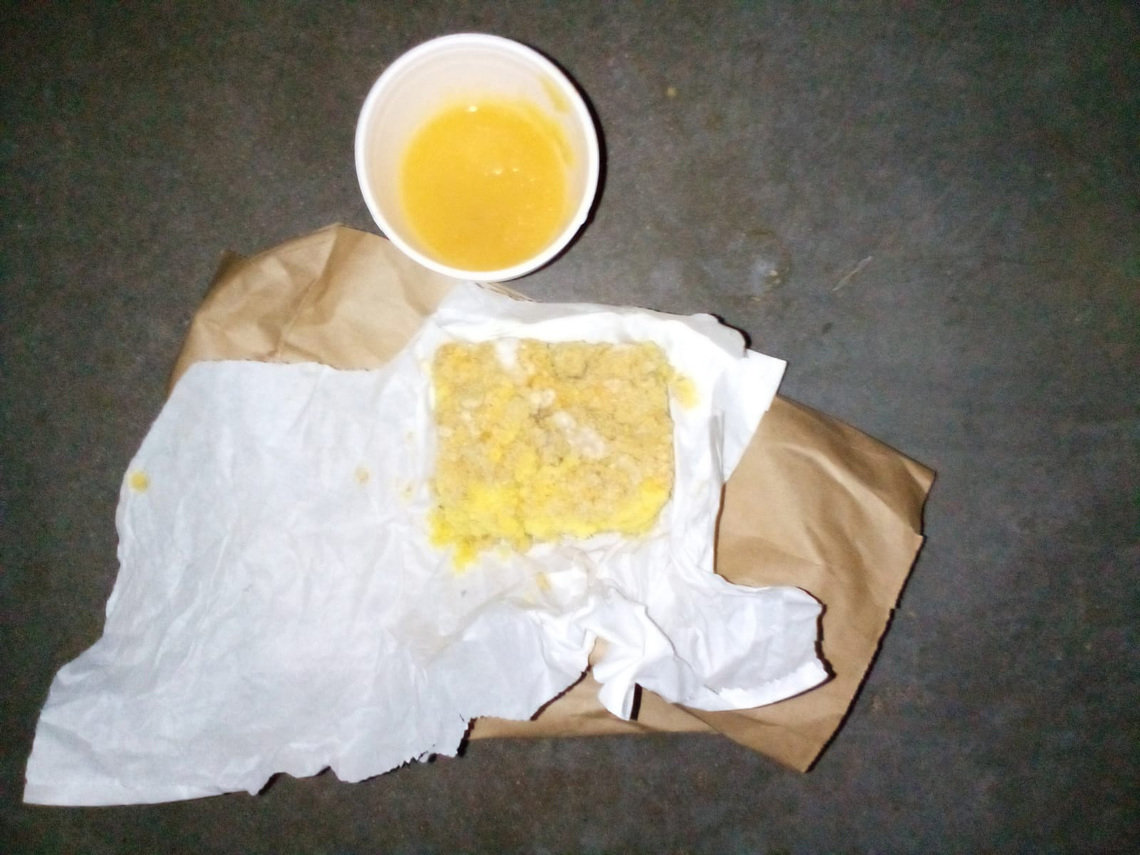 Photos of cold meals served to Texas prisoners during the Feb. 2021 snow storm and power outage.

At other units, prisoners with contraband phones sent pictures of their increasingly pitiful meals, including one that was nothing but a small piece of cornbread, a half a piece of cheese, a handful of raisins and a hot dog with no bun or ketchup. The quality (or lack thereof) of the bagged meals served during lockdowns has been a persistent problem, and one that the pandemic—and now the blackout and snow storm—has just exacerbated.

“The short staffing and the element of surprise and then the quality of the labor is this giant crap sandwich that I get to enjoy every morning for breakfast and every afternoon for lunch,” one man said before sending pictures of the single square pancake he got for breakfast.

To make matters worse, more than a dozen prisons lost some or all of their access to water. At Polunsky—the maximum-security unit that houses death row—some prisoners told their families they’d gathered snow into buckets so that they could flush dorm toilets. Others started going to the bathroom inside paper bags.

“They’re trying to distribute bottled water but they don’t have enough to go around, they can’t flush the toilets or take showers,” said Jenny Allen, who has two relatives at Polunsky. “The toilets are overflowing with waste. The inmates are starting to fight, there’s a whole lot of tension—because they don’t have water.”

Advocates for prisoners say these problems have been years in the making.

“The Texas prison system is in that category of infrastructure that the Legislature doesn’t give a flip about,” said Jennifer Erschabek, director of the nonprofit Texas Inmate Families Association. “It’s just punishing these people on all sides: COVID, heat, cold, food, understaffing, broken prisons.”